Why would anyone complain about a Government offering of a prayer to God, seeking guidance at a time of national / global trouble?

The anti-Trump news commentators here in the UK are in their element reporting on (and hoping for)  Nancy Pelosi’s threatened impeachment of Donald Trump in the wake of the (entirely contrived) “Ukraine scandal”.  But why?  Why do they hate him so much when, by objective standards, he seems to have done quite a bit to improve life for the American people.  What’s behind it all?

Take a look at the video clip below and ask yourself – is this what’s behind it all? 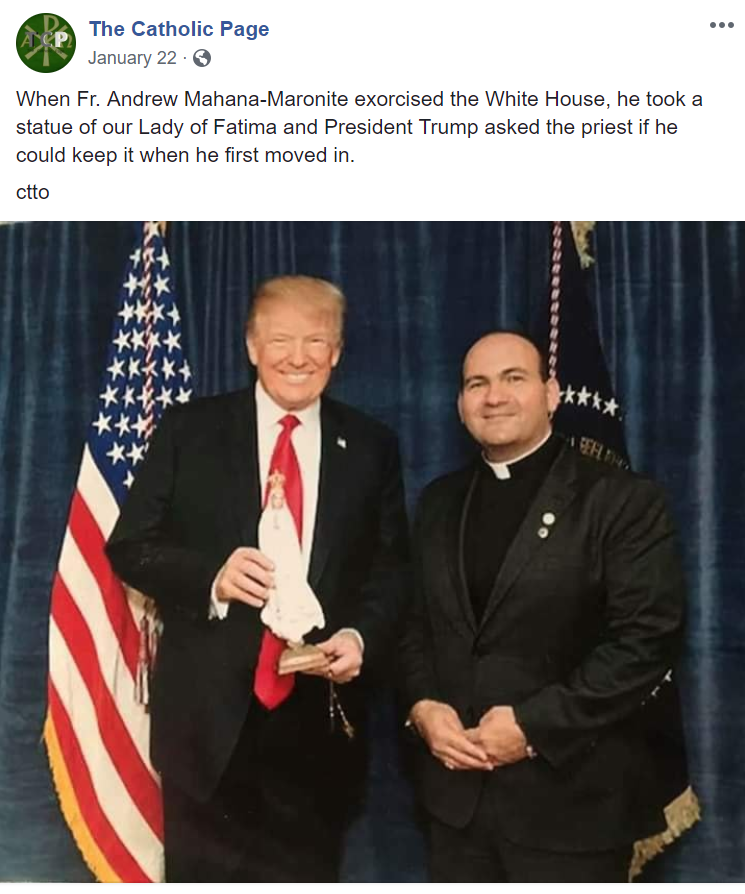 At a time when raw evil is consuming the world, I have no doubt that Donald Trump’s efforts to keep God in the picture is the main reason his enemies hate him so. Of course, he’s not Catholic but his innate desire to use his office to remind the world about God certainly is not not Catholic.

We distinguish, of course, between sound theology (which Trump obviously lacks) and the President’s basic, almost childlike, attempt to remind a nation hellbent on destruction that God exists and that our nation must acknowledge Him and the power of prayer.

Once this distinction is made, we can take solace in the fact that Trump’s Godly presidential reminders are not wasted efforts, nor are they the deceptive words of papal ecumania which, coming from that exalted office, serve not truth but error.
Trump has not the benefit of sound theological training, access to the Sacraments, and the habit of formal prayer. In other words, he’s doing the best he can with the little he’s been given in a world where even the Catholic Church’s moral authority has become something of a joke.

Somehow, this man is acting more like a Catholic than are most Catholic leaders in the Church today:

Who knows where this will end? But without him, what are the chances Americans will hear words about God, the Bible and the power of prayer from the North Lawn ever again?

In fact, given the cast of democratic characters threatening to run in 2020, it’s more likely they’d be sacrificing babies to Moloch on the North Lawn. And obviously it would be supremely unlikely that any one of them would be seeking out the services of a Catholic Priest to conduct an exorcism upon taking office.

There’s so much to say about the above heartening report, but let’s focus on considering the fact that, in the closing words of said report, referring to the candidates for election in 2010: “…it would be supremely unlikely that any one of them would be seeking out the services of a Catholic Priest to conduct an exorcism upon taking office. “

Which, of course, begs the question: what did Donald Trump know about the goings-on in the White House that the rest of us don’t know (and are unlikely to find out), that prompted him to arrange for an exorcism?

And notice that photo at the top, of the President holding the statue of Our Lady of Fatima and clutching a rosary in his hand… We really MUST pray for the grace of conversion to the Faith for him – it seems to me that he has a great deal more Catholicity in his soul right now than certain of the U.S. Bishops, if not Pope Francis!  Recall that, on his election, a number of Catholic Truth readers sent President Trump material on Fatima.  It would be wonderful to think that he may have received and read that information.  Whatever,  let’s pray now that through Divine Providence the President finds the traditional Catholic Faith – Our Lady of Fatima, pray for him!