If there’s one thing that runs to the heart of British culture, it’s being a stickler for rules and “the small print”. Oh, and we love snitching too, apparently.

In news that seems surprising, but then immediately isn’t, a police force says it has had a surge in calls from people reporting their neighbours for “going out for a second run”.

Government lockdown rules allow people to leave their homes to take one form of exercise a day. And Nick Adderley, from Northamptonshire Police [pictured below], has told the BBC that during this overstretched and stressful time his force has received “dozens and dozens” of calls about people allegedly ignoring the order.

Police now have the powers to fine anyone found to be flouting the law. But, to be honest, aren’t there better uses of everyone’s time? Such as dispersing big groups and, you know, dealing with serious crimes? 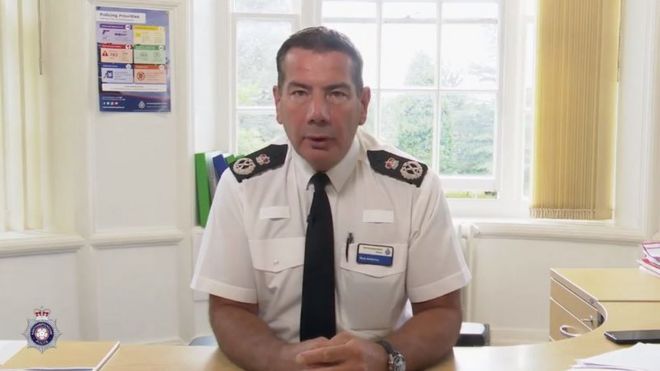 Adderley said:  We are getting calls from people who say ‘I think my neighbour is going out on a second run – I want you to come and arrest them’ We have had dozens and dozens of these calls.

To make matters even more ridiculous, the force has also been getting reports from people whose neighbours are gathering in their back gardens.

We won’t have police officers crashing through garden fences to check the ID of everyone who is there to see whether they live at the house or whether they should be self-isolating.

We wouldn’t want to discourage people from making us aware, but we have to set expectations. If people think we will be descending on these houses with blue lights, then we won’t.

But be under no illusion, we will be using these powers if necessary.

One man who’s absolutely not happy about this news is Nigel Farage. He compared the UK to “east Germany” after learning the news that people were calling the police over these matters.

But sorry Nige, at least this means that Brits are finally taking these regulations more seriously, which is a good thing. Though maybe people should refrain from calling the police unless it’s definitely, 100 per cent necessary.

Can you name any canonised saint who would be likely to call the police to report a neighbour for breaking these temporary rules, set by a secular Government, given that nobody seems to complain about real immorality in UK society?  Only a minority of people actively complain about the murder of unborn babies, and same-sex “marriage” is OK with the majority now, despite the majority in Scotland having voted against it – twice.   Seems that if the secular Government makes the rules, they must be kept – God’s laws, on the other hand, are expendable.   Is Nigel Farage right to argue that “We have become East Germany c.1985 overnight. Next thing children will be encouraged to report on their parents. ” [Twitter].

Would you report a neighbour in these circumstances?  Can you name a saint to support doing so?