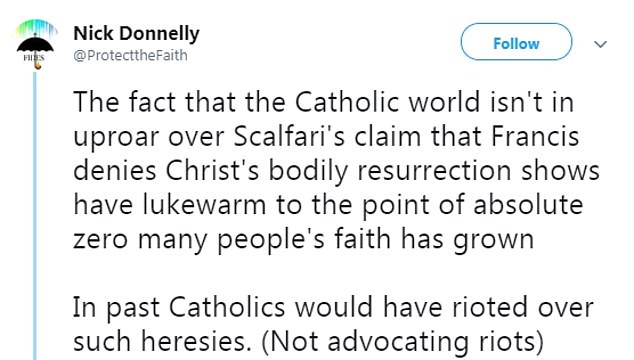 Deacon Donnelly’s observation is bang on the button.  If Catholics held to even a slithering of authentic Catholic Faith, we would, indeed, be causing uproar, mayhem, to make crystal clear to Pope Francis that up with  his anti-Catholic, and anti-Gospel, words and behaviour we will  not put!

In the past, Catholics would pull dissident priests from their pulpits for preaching heresy but here we have a pope who is speaking and behaving in the most anti-Catholic, anti-Gospel manner imaginable, with bishops either defending him or remaining conveniently silent, and a passive laity, long conditioned by the multifarious “reforms” which have effectively changed the Faith of our Fathers into something which none of the great canonised saints would recognise.

Isn’t it long past time for the senior – allegedly concerned – Cardinals to actually do something to publicly rebuke this pontiff, instead of just giving interviews and writing books/articles which are unlikely to reach the majority of Catholic laity who, thus, in their ignorance, are being misled into error by him? Why has there been no major Press Conference, televised world-wide?  Surely, that is the least we can expect from top churchmen at this very late stage in the worst ever crisis in the Church’s history?

However, if you disagree, be sure to tell us…